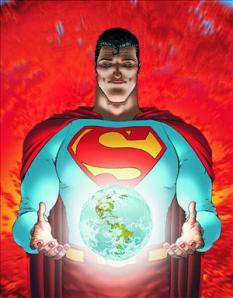 As you can tell from previous posts in this Blog, I am a Superman fan, big time. My first introduction to this character was when I was a child watching episodes of The Adventures of Superman.

Then shortly after I was introduced to the Superman Comics, but not the Superman comics which were being published at the that time.

When I was younger I would go to the local barber shop to have my hair cut by Ernie the barber and he had a large collection of older comics, I think that they were his sons from his younger days. Most of these books were from the silver age of comics from the 60s.

The 60s was probably the greatest age of Superman, where the mythology was at its highest, with different colored Kryptonites, a whole array of Superman family members, the legion and so on.

But over the decades especially after the the first Crisis and the introduction of the “Byrne” era the character has grown stall and tired and the really great stories have been few and far between.

It is only recently in the past five years or so, that the newer writers have embraced the past of the Man of Tomorrow and started creating some really great Superman tales……which call back to a more innocent day and are in fact “fun”.

But no writer has touched on this as best as Grant Morrison in his twelve issue mini series All Star Superman.

This series is an out of continuity story which tells a tale of a dying Superman, who must face his greatest challenges in his last days just before the end. The series seems so fresh yet so traditional at the same time. We have lots of nods of the head and homages to the great silver age of Superman, and we touch base with modern mythology of Superman as well.

Of course one of the greatest challenge we have in the story is the great Superman villan Lex Luthor who finally is sitting on death row, and who although is facing death is unrepentant for his crime and feels justified in his hatred of the Man of Steel. He is the reflection of Superman goodness with equal portions of evil.

Also in the tale are old familiar faces such as Lois Lane, Jimmy Olsen and the whole planet gang and also new friends from DNA P.R.O.J.E.C.T. ( a nod to Cadmus Project from the Kirby days).

Also included in this Superman tale are Superman Robots, Bizarro, Atlas, Sampson a Doomsday of sort, Superman One Million, the tyrant Sun and the Death of Pa Kent.

This is one of the best Superman tales ever told if not the greatest. It moves forward and back at the same time and we are taken along for the ride.

The book also includes artwork from often Morrison collaborator Frank Quitely. His version of Clark Kent is amazing, and for the first time you can understand how he gets away with the secret identity. It not just a pair of glasses, but a complete change in body language and posture. So complete is the disguise that even when Clark reveals his “Secret Identity” to Lois she does not believe him.(No one believes that Clark can be Superman).

This series was originally published in twelve single issues and then two Hardcovers, then two trades and now an Absolute edition.

This is not just a great Superman Comic it is a great Comic.

Posted by iamthebiggestgeek on January 25, 2011 in Comics

The Scarf is finished

Finally after all this time the Scarf is finished and looks pretty good. I had a lot of help from my friends Anna and Brandi. So here is a picture of the scarf with my puppy Oliver.

Posted by iamthebiggestgeek on January 18, 2011 in Uncategorized